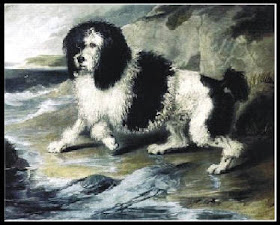 “The Poodle”
The “parti poodle” is  the original poodle. When describing, drawing, painting, and discussing poodles in the 1400s, 1500s, 1600s, 1700s, and 1800s the color was most often parti-colored.
In fact, the first ever dog book for the United States of America has a parti-colored poodle for “The Poodle”. So pre early to mid 1900s a parti colored poodle was what people automatically thought of when  they thought poodle. So is laymans terms– what color do you think of when you say Labrador Retriever– most likely yellowish/blonde color, right? Well, that’s how the parti poodle was viewed.
It wasn’t until the early 1900s did the horrendous act of killing (culling) parti poodles become very trendy. During that time solid became the preferred color, and the popularity made its way into the United States where many ignorantly fell suit. (some of that ignorant mindset it still in play today with pridefully ignorant people)
In that time period there were a few notable kennels that continued to breed parti poodles even though many were working hard to eliminate the parti poodle from poodle history, one of which was named Vulcan Kennels of England. Many of the Vulcan Kennel partis were derived from poodles bred by Jane Lane of the famous Nunsoe Kennels. So though there were breeders culling partis, there were still admirable breeders that were dedicated to breeding superior original poodles.

There were two main ways some breeders and show dog people worked to eliminate the parti poodle: 1.) By killing them (also known as culling when it refers to dogs or animals) 2.) By purposely not registering them. So when a solid poodle would produce/birth parti poodle puppies (as they often did since they themselves came from a parti), the breeder would only register that poodle as having solid-colored puppies, this went on for generations and generations. This unethical practice actually taints the true pedigree of many poodles born between the late 1800s and  late 1900s/early 2000s.

The Standard Poodle has a life span of approximately 14-15 years. The key to having a healthy dog, is to buy a healthy puppy. It is important to find a breeder that breeds only healthy Dams and Sires. It is also important to make sure that they do not have too many common ancestors in their pedigrees. Most reputable poodle breeders select their breeding stock by pedigrees. It is also important to get a health certificate and health guarantee with your new Standard Poodle puppy.

Please remember that testing of parents does not guarantee that a puppy could not develop a hereditary problem. Genetic testing helps to eliminate some problems but others show up late in a dogs life. A responsible breeder may still have problems that crop up later, even if a dog has been screened or tested.

Standard Poodles are one of the best picks for people with allergies. The poodle has a wool coat and does not have near the amount of dander that other breeds have. The poodle has a very small amount of shedding. They do need to be brushed on a regular basis though to keep them looking their best. If you or a member of your family has severe allergies, it is best to visit and spend a little time with a puppy or adult dog to be sure that there is no adverse reaction before buying a new puppy. Some people are allergic to all dogs…Period!

Standard Poodles rank second in intelligence of all the dog breeds today. They are fast learners and have a passion for fun. The Standard poodle breed has been used as service dogs for many years. They were bred in Germany as water retrievers, make excellent gun dogs and love to hunt. Many owners love to train them in agility and in obedience.

The Standard Poodle loves children and is very protective of the family. They also require less structured exercise than most of the larger breeds of dogs. They will take a jog with their owner or be content to lay by them for hours. If you are looking for a shadow, then the Standard Poodle is the dog for you. They will follow you from room to room and never get enough of you, good mood or bad. They are very forgiving.

Standard Poodles are the largest of the poodle breed. Their size can range from 15 inches at the shoulder to 30 inches or better. They weigh from 35lbs to over 100lbs. They have a very sturdy body and should be square. They should have a scissor bite, but an even bite is acceptable. The ears should be long and the top of the ear should be even with the eye. The eyes should be almond shaped and dark.

However, the CKC ( Canadian) and AKC( American) do not allow them in “Conformation” events – however, they do allow them to enter in all other official categories (obedience, rally-o, field trials, agility events). The UKC (United) and (Continental Kennel Club) do let them enter in their Conformation events as well as everything else. UKC events are becoming a very popular events due to the more relaxed and fun atmosphere !

Standard Poodles require regular grooming and brushing. Clipping should be done about every 8 to 10 weeks some would say even more frequent. It is very important to train them young to love the grooming process. Most Standard Poodles enjoy the time spent brushing and combing them. It becomes a special time that is just set a side for them. The more often they are brushed the better for the condition of the coat. The nails and ears should be tended to on a monthly basis also. You might want to check out our puppy care page for more information on how to care for your new puppy.

The Standard Poodle is a highly intelligent, assertive, responsive and loyal animal. These traits make it a great friend and excellent watchdog. Poodles are sensitive to their owner’s emotions, ready to be your best friend and quietly sit by your side when you are sad or equally ready to go play ball when you’re happy. Poodles are great for people with allergies because they don’t shed hair in the same fashion as the average dog, nor do they have a lot of dander. For those macho men and women who think the poodle is for sissy’s, they were once prized in Europe for their great water retrieving skills. The poodle is a versatile dog and competes in field, obedience, and agility trials and is used as a service dog for the disabled. They have also been used as sled dogs and even raced in the Iditarod by John Suter. Because of their keen intelligence and agility you will often see them perform in circuses. Standard Poodles are the complete dog.